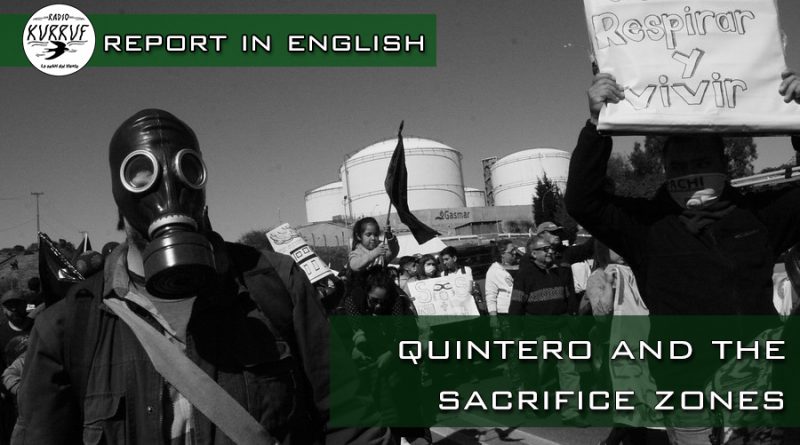 Listen our report about Quintero and the sacrifice zones:

Quintero and the sacrifice zones

In Chile, there are cities and rural zones that have been called «sacrifice zones», as their population and environment are sacrificed to favor capitalist economic progress. One of these zones is the seaside city of Quintero, located in the Valparaiso region, which has near 31.000 people. At the end of the XIX century, the first port in the area was built, from where agricultural and livestock production was exported. The beauty of the place drew in many investors that transformed the place in one of the most exclusive spa of the Chilean aristocracy. The industrialization process that the country underwent in mid XX century influenced the construction of the first thermoelectric in Quintero. To date, there are 12 companies that form one of the major industrial complexes in Chile. The activities in the area are: Copper foundry, the operation of a coal thermoelectric complex, oil industries, liquefied gas terminals, and chemical industries. These industries have generated air and sea contamination with heavy metals, affecting marine species and fishermen of the place. Since 1960, there are environmental disasters records in Quintero, since 2011 there have already been 8 cases of intoxication, 24 coal strandings, 25 alerts of presence of sulfur dioxide in the air, 2 oil spills on coasts, like the one that occurred in 2014 involving 38.700 liters of oil. Besides that, there are dozens of cases of cancer in workers in the industrial zone. Cancer is a common death cause in Quintero.

The situation went out of control on August 21 of this year, when several people alerted about the presence of a strange yellow dust in the air, few hours later, the emergency rooms of the hospitals near the area collapsed with intoxication cases. Days later, this situation continued with a total of 973 intoxicated people and emergency consultations registered since the first event. Some symptoms were vomit and nausea, in addition to neurological symptoms, such as decreasing reflexes. The Medical College identified chemical substances that cause leukemia and other complications related to oxygen transportation. The damage caused on DNA could also lead to mutations. Medics also alerted methyl chloroform presence, a forbidden element by Chilean legislation, showing a lack of environmental oversight.

The Chilean Environment Minister declared to the press:

“As Chilean State, that has failed for 50 years the towns of Quintero, Puchuncaví and Ventanas, we will establish regulations to entail the companies to do those investments.”

The reaction of the citizens in Quintero was an immediate protest. Then, they organized the occupation of squares and schools, even the town hall building was occupied for a few hours. After days of confrontation with the police, the demonstrators rose the debate and the drama of sacrifice zones on a national level. People are asking the shutting down of the polluting industries until the mystery of toxic emissions’ origin is solved and also the compliance of WHO norms by the industrial plants.

“That very day, on Tuesday, our children and the Quintero people were intoxicated. For 50 years, this commune has been punished as sacrifice zone, neither the State nor the private institutions have ever assumed the responsibility, because here are economic vested interests between the government and the companies.”

On their behalf, the government decided to close the schools, but not the industries, despite the current danger in the air. This decision caused only more and more anger in the people and, therefore, the authorities were forced to paralyze the functions of some companies and to pass also air quality control, which has been carried out by private institutions so far, to the State. In the meantime, a tie between the Environment Minister and President Piñera with some of the responsible companies was revealed. Lots of manifestations were taking place when the President arrived to the zone, he was even received with gobs from the citizens.

“It is a shame that the majority shareholder of the Environment Minister’s husband is part of the directory of Oxiquim. It is a shame! Besides the health issues, we want the Minister to be out, we want her to quit! It’s moral duty, she cannot continue because of the companies’ vested interests.”

Representatives of the medical college stated that:

“The focus must be the contaminating sources, Chile still doesn’t have the WHO norm. We believe we are part of the OECD countries just when it is convenient for us, these kind of companies in other countries are not polluting, they simply don’t fulfill the measurement control and we hope that Chile will endorse, that is what we expect from the government.”

While the polluting companies are being investigated, the government has decreed one environmental alert after another. As a result, the industrial production has been forced to stop for short periods and so the air becomes breathable again. In the middle of this conflict, on October the 5th, the young activist Alejandro Castro was found dead in strange circumstances. He was secretary of the Fishermen’s Union and his body was found near the railway in Valparaiso, the night after he participated in a big demonstration. The police said that “the cause of his death was choking by hanging, without signs of wounds from other people”. On the contrary, his inner circle rejects this idea and points at a political murder, they even say he was threatened by the police, that arrived to Quintero to repress the manifestations. 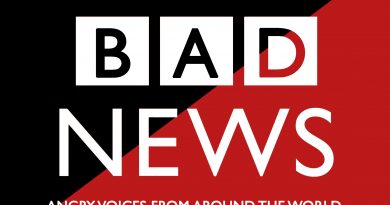 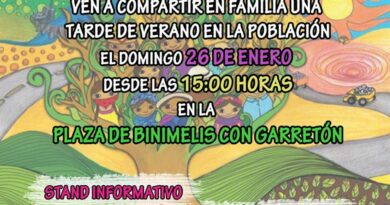 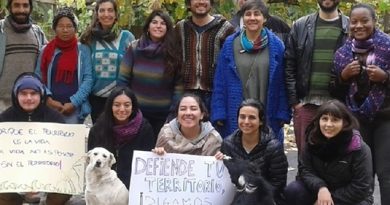