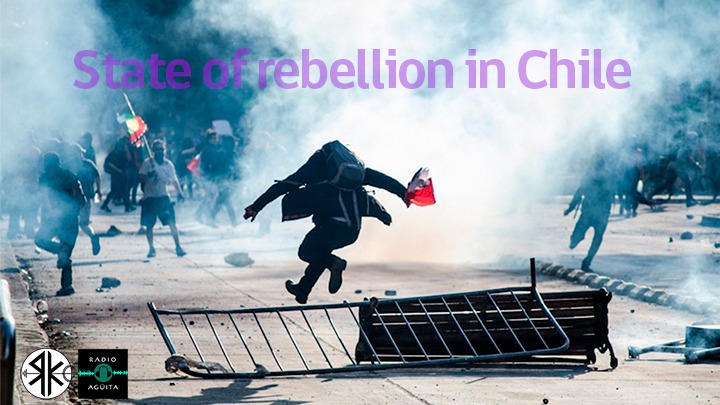 Chile is going through the largest protests since the return to “democracy”. While the government declared state of emergency and curfew in several cities of the country, Chile has declared a state of rebellion.

It all began in Santiago on October 14th as a high school students’ protest, who were determined to dodge the payment of the metro’s fare as a response to a recent fare hike. This manifestation, which in legal terms is barely a minor offense, was strongly repressed and similar incidents took place the following three days. On October 18th protesters were shot in Estación Central one of the main metro stations.

The excessive violence was definitely the final straw. A protest that began peacefully turned into a popular uprising facing repression and irresponsible and inappropriate declarations made by the transportation and economy ministries. They were no longer just high school students fare-dodging; but also settlers, workers, elders and families that joined the students banging their pots in different spots of the capital.

And after closing some metro lines while protests were still taking place on the streets of the capital, on October 19th at midnight Sebastian Piñera declared state of emergency in Santiago and named General Iturriaga as the national defense chief, a relative of a former DINA (the Chilean secret police in the Pinochet’s dictatorship), who has deployed the armed forces on the streets.

For the first time since 1987 –the last years of dictatorship– thousands of soldiers prowled the streets of Santiago. That very night about 70 metro stations were burnt in the capital, some retail stores too and some supermarkets were looted. The unrest was no longer because of the metro’s fare hike, but against the injustices of the neoliberal model and the militarization of Santiago. In consequence, people crowded the streets of the capital and several cities along the country.

A day after, the government declared state of emergency in the regions of Valparaiso and Biobío now controlled by the navy. At the same time, Piñera announced curfew in six more cities restricting the citizen’s freedom of movement and their right to assembly at a specific time.

The curfew has been massively defied in many cities; people get together banging on their pots or pans and erecting barricades on the streets, facing violent repressions while more and more cities are joining the protest throughout the territory. Repression includes shooting and hitting people indiscriminately, throwing tear gas bombs, using armored cars and tanks on the streets, torturing arrested people, making people disappear and murdering them. These facts are not being covered in detail by the official media.

While independent media make sustained effort to report on social protests on the streets and several cases of abuse of power, the official media focus on damage to private property, spread fear among the citizens and justify the presence of armed forces on the streets, hiding the actual reasons of the social unrest.

To november 10th, 23 murders by state officials were registered, 5.565 people arrested and 1.915 people wounded, of which 384 were injured by bullet impacts, based on the information gathered by Instituto Nacional de Derechos Humanos (INDH, according to its name in Spanish). Besides there are reports of stripping, physical and psychological abuse and delays in bringing people to police stations.

At least 9 people were stripped in different police procedures and the detainees complained about excessive use of force at the time of arrest, harassment to children, tortures, sexual harassment, among other violations. [Developing story…]

The reasons of the social unrest

Nowadays, protests are in response to shortcomings that Chilean people have to face in their daily life, due to the privatization of the pension’s system, roads, healthcare system, education and water. If this were not enough, there is a stark contrast between high costs of living and low wages. It is estimated that 70 % of the people earns less than 770 dollars a month and 11 million Chileans (from 18 million in total) are in debt according to the Fundación Sol data.

Native people also suffer with this, but they have been demonstrating for decades. The militarization has been the response of the State (both left and right wing governments) to the claims of Mapuche given the usurpation of their lands. Piñera’s government is responsible for the polarization of the Chilean-Mapuche conflict, who since 2017 has started with a police deployment known as “Comando Jungla”, that is special force troops of Carabineros instructed in Colombia. They are guilty of the murder of Camilo Catrillanca, a Mapuche comunero in November 2018.

Another important claim in Chile is to guarantee the right to a “free, public and quality” education. This was part of the public agenda after large students’ protests in 2006 and 2011. The one and single response students have received from Piñera is terrorism of state against them with the “Aula Segura” plan. Along with this, we have witnessed this year kidnappings of high school students at the Instituto Nacional from their own classrooms in hands of policemen, who have entered to this school with tear gasses in several occasions.

We are facing the consequences of several years of repression and a growing social organization against the measures taken by the State and the neoliberal extractive model raised by the ruling political and economic class. For instance, some weeks ago the senate approved the TPP-11 transpacific agreement. Let’s remember that November this year, the country will host the COP-25 (Conference of the Parties) and, at the same time, the APEC (Asia-Pacific Economic Cooperation). For such events, presidents of around the world (USA, Brazil, Argentina, etc.) aim at coming to Chile.

In addition to all the previous reasons we have outlined, it is necessary to mention that the growing feminist movement have also presented their demands such as free abortion and the end to the restrictive sexual and reproductive policy. Furthermore, the right to housing, a new migration law, a law of media with feminist perspective and the end of extractivism.

Today in Chile we are facing a society that rises through the cacerolazos (pot bangs), barricades, solidarity and organization. However, at the same time we are facing a right wing government that extinguishes the fire with gasoline, causing chaos trying to justify the military presence on the streets. Some people speak about an auto-dictatorship of Piñera and the military force to allegedly bring the dictatorship back, of which Chile was free only three decades ago.

In this context, we would like to outline that last October 10tth in the southern city of Victoria in the Araucanía region, a right wing group called APRA was cutting routs with the support of truck drivers asking for the declaration of state of emergency in Chile, something inconceivable some days ago.

In Chile the situation is confusing and plenty of videos and images taken by people show that militaries, cops or civil police themselves are responsible of the barricades, arsons to shopping centers and looting in different cities. We want to alert everybody who reads us, pay attention to what could possible happen in the territory of Chile in the days to come.

The response of the Chilean political class

The government scrapped the increase in public transport of Santiago fares, overshooting the main point of the strike. The transport fare is just the tip of the iceberg that led to the protests. However, the neoliberal capitalist system, inherited from Pinochet’s dictatorship, face an imminent crisis today. This system is based on free trade of natural resources like water and privatization of all what should be considered as basic rights provided by the state, causing social issues that none of the “democratic” governments has been able to cope with. 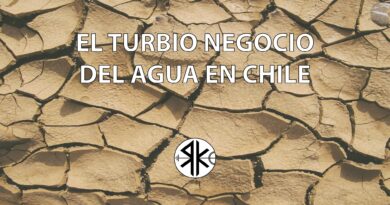 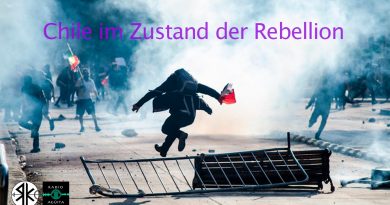 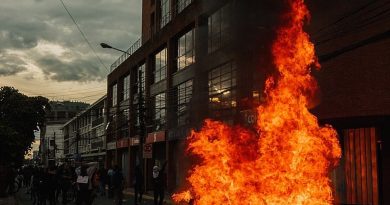