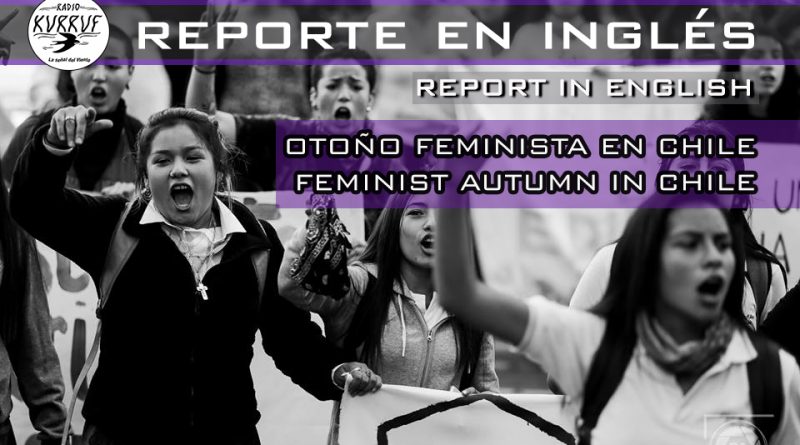 Listen to the report in English that Radio Kurruf has made about the Feminist Autumn in Chile:

Hello comrades, we are from Radio Kürrüf from the Chilean region. This is our report of June and we are going to talk about this “feminist autumn”

During this past May (2018), several University campuses and secondary schools were occupied in the Chilean region mostly by women. The main reasons that triggered these demonstrations are: the countless cases of sexual abuse and harassment from teachers and professors to students, most of all, women; the lack of protocols and effective procedures to solve violence conflicts at educational institutions, which includes administrative staff and professors and an urgent critical review to the patriarchal system and also the urgent need to destroy it. In response to these, women were self-convene to hold the first assemblies on university campuses. After that the different campuses along the territory were occupied only by women, occupations that are mostly of a separatist character, which turned into what today we call the “Feminist May”.

It has to be emphasized that this movement has arisen from the students and, at least until now, it has tried to keep distance from the Chilean Students’ Confederation and political parties, in contrast to what happened in the student movements of 2011 and 2006, because this time the critique goes beyond the institutions. Moreover, this Confederation has always proposed the non-sexist education as an additional or secondary issue to their fight. Regarding this, the students of the University of Chile, in Santiago city, said:

“…we understand that the Chilean Students’ Confederation is an instance that has links with political parties that we don’t want in our places, which have histories of violence against women, where women have been silenced for a long time. So, I got the feeling that the Confederation has understood that this is not a place where they can have the predominance in the conversations. And I also believe that this happens because the focus of the Confederation has been different, it has been limited to the student issues, and we are a feminist mobilization. Which makes a big difference in the approaches, the discussions, and the roles that the classic student politicians are having.»

The latest survey published on May 22 by the Students’ Federation of the University of Concepción, showed that 17 universities are on strike and 22 universities are occupied along the Chilean region. However, this movement goes beyond the student issue and is more focused on a feminist critique to the society as a whole. Starting at several universities, this movement has grown to “inter-occupation” assemblies, “inter-zonal” encounters, until the first national encounter of self-convene women in Concepción city, which took place the last 9 and 10 of June. Students from the Catholic University, in Santiago city, explained:

“It consists in an anti-political-parties movement, composed by many women from different faculties, all the carrers are freely called to attend the assemblies and be part of this movement, and the particularity of this feminist movement is that it is intersectional, it also includes sexual dissidence, gender dissidence, ethnic dissidence and dissidence due to functional diversity»

The intersectionality is a topic that has been deeply spoken during this “Feminist May” movement. We understand intersectionality as a critique to those feminisms, which sets aside the implications of being part of an ethnic group, race, social class, sexual identity and the functional diversity. This concept has allowed to understand that women are not equal to each other and that we are differently social oppressed by those particularities. That’s why the self-convene women from every mobilized area claim for the deaths of women in the Chilean territory, as Macarena Valdés, a Mapuche activist, defender of the environment, who was murdered under strange circumstances, which death was passed off as suicide; Joane Florvil, Haitian migrant murdered by the Chilean State; Nicole Saavedra, kidnapped and murdered because she was lesbian; Lorenza Cayuhan, Mapuche woman, forced to give birth in jail; Mara Rita, a trans who died of medical negligence; or Yini Sandoval and her three children, who died in a fire, an unfinished femicide case because of judicial negligence.

Facing this increasing “feminist wave”, the right wing government of Sebastian Piñera, was forced to announce a “Women Agenda”, which promises to guarantee the equality between “men and women” and to avoid any form of abuse. However, his promises were strongly criticized by the movement, because they don’t aim to eradicate the violence, but to make the capitalist system stronger, which in turn, reinforces the patriarchy. Regarding this announcement, some self-convene women commented:

“It is necessary to emphasize that all the reforms he talks about in the “gender program” are empty, there is no structural change, and it is not aimed at a change in education with a non-sexist approach, what is one of our main demands. He is not talking about empowering women, but rather he talks about protectionism, about paternalism that has been reproduced from the conservative logic that he represents. «

We can see, once again, how the State takes a revolutionary discourse for itself and, finally, turns it into a friendly stuff for the system. So, the government creates this gender plan to avoid that the reflections about feminism go in depth, to avoid that the movement grows up. The government adds this topic to its program and seems possible the idea of a liberal feminism that denies patriarchy and capitalism as the origins of women oppressions. 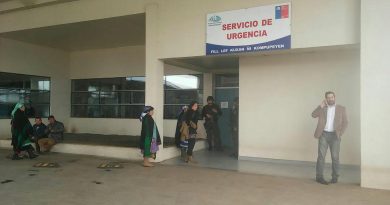 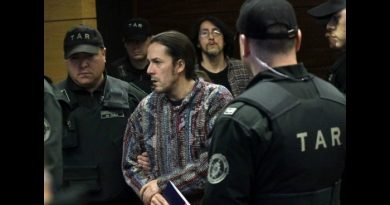 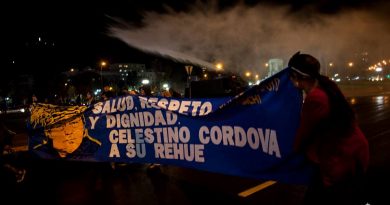