Listen to the report in English that Radio Kurruf has made about the environmental devastation of mining in the north of Chile and the resistance of the Lickan-Antay people:

We are from Radio Kurruf, in the Chilean region. This is our report about the environmental devastation of mining in the north of Chile and the resistance of the Lickan-Antay people.

Nowadays, the mining industry is one of the main economic activities in Chile. It currently provides 9% of the national GDP and is the area with highest foreign investment with 33% of the total. The country is the main producer of copper, rhenium, natural nitrates, lithium and iodine worldwide. In addition, it is remarkable the participation of the country in the molybdenum, silver and gold production.

However, these facts are not new. In the past, the Atacama Desert and the highlands in the Andes Mountains, the Lickan-Antay native people (“inhabitants of the territory” in their language) developed tools and jewelry with copper, gold and bronze using ovens for the melting process.

After the conquest of Latin America in hands of the Spanish Empire, the explosion in mining in the North turned out massive. Even though, it wasn’t until the nineteenth century when mining had a great boom in the country once the independence in 1818 was concluded, because since then, there weren’t any obstacles that were imposed on colonial trade, opening up the way for the international trade.

The industrial revolution caused a great global demand for copper, which added to the constant war conflict scenario in the world, contributed also to the saltpeter boom those days, mainly because it was used in the manufacture of explosives. In addition, it was used as fertilizer, which made it essential for the food production.

In the twentieth century, the industry was revolutionized by the use of this mineral in electrical and telephone connections and in the electronics in general, increasing its worldwide demand and the interest from American enterprises. These saw their interest threatened by the nationalization process that was carried out by the Salvador Allende’s left-wing government. That’s why they organized the 1973 putsch and, with Pinochet in charge of the dirty job, they were able to regain the control through privatizations that led to todays 80% of the Chilean mining into the hands of private enterprises, most of them foreign.

All this historical development of mining and extractivism in the northern Chile has meant a serious human exploitation displacing the Lickan-Antay people from their lands and causing a strong union movement. Apart from a terrible environmental devastation that has turned the valleys of the North into industrial landfills, the mining enterprises install their industries next to river courses, salt fields and wetlands, where they throw their toxic waste, which contains heavy metals such as arsenic, mercury, cadmium, lead, copper and, in some cases, cyanide. Due to the pollution, these metals are considered to be responsible of high rates of cancer and other diseases.

Today, the Lickan-Antay communities in the great Atacama Desert, live a revitalization process of their struggle for water, the defense of culture and fight against pollution and devastation generated by the mega-mining in the region. Since January this year the scenario became even worse as the private and state enterprises signed an agreement to extract lithium until the year 2030, a worrying situation if we consider that the lithium reserves are located in the salt lands next to the rivers and streams of the area, which provide the water essential for the communities’ agriculture and livestock.

In San Pedro de Atacama we were able to talk with Cristian, who gave us his valuable testimony about the revitalization process the northern communities are facing:

Cristian: “We basically have hydric problems in the region, there are villages that close the water sources at night, so they can have water the next morning. We have a flora, fauna and environmental contamination problem, besides social and political issues, that are the tip of the iceberg. The fight that we are having with SQM, the most corrupt mining of the country, whose CEO is Pinochet’s son-in-law. We are also against the agreement signed between the state and SQM, that have under its foundation to increase exploitation. More lithium. More brine.”

Radio Kurruf: “And to contextualize, what is happening with the water, are the mining using water, Do they take water from the Atacama Salt Flat? What’s the problem there?”

Cristian: “Basically, the mining problem is that they extract water twice, as they are allowed. SQM is extracting one thousand eight hundred liters of water per second, a huge number. They have water pump that they haven’t declared, with dining rooms and waiting room inside, like a hotel. Now, the hydric stress is the issue that we are currently living, but it’s also important the contamination produced in Atacama’s Salt Flat. Our fight, as Lican-antay people, is to stop the corruption that exist in these governments, with Piñera, Bachelet, Lagos, Aylwin or Pinochet, who are to blame for this situation.”

Cristian: “These agreement doubles the current lithium extraction. There are coming big projects that will employ water. Under that circumstances we mobilize: we close roads in San Pedro de Atacama, we occupied the mining camp’s entry, blocked the road from Peine to Toconao village, and we stopped the Atacama’s Salt Flat’s plant for 8 hours. These mobilizations are the beginning for what coming next, of the actions that we’ll have to do, that obviously we can’t talk about. Because we are angry at the Chilean State that has violated us and the water code.”

We were also able to talk with Karen Luza from the indigenous association from the river San Pedro de Atacama, who explained us the communities’ dynamic in relation to the water and the struggles for its defense:

Karen: “We are an island in the middle of the desert. We are many islands, little oasis, really small, with three hundred people maximum, other with 100 people. But all these communities together conform San Pedro de Atacama community. Our irrigation technique is ancestral. We have never change our irrigation by inundation. Every 24 days the corn trembles waiting for water, I mean, think about it, what plant resist 24 days without water? But our local corn, or our broad bean, our garlic and other plants we sow are always for self-supply”

Karen: “So when the river flows is not to feed SQM, nor bussinessmen. We let the river flow because there is biodiversity deep down, all our flora and fauna, and there are places that our grandparents still use for herd. Then you can see why we talk about damage. The government, the corporations and all that people that come with their modern monitoring systems have to recognize that the watershed is only one, that begins in the mountains and ends in the salt flat. The river supplies water to this project, so it’s not the idea either to cut the water to the corporation, that we could do by changing the course of the river. This is to maintain the tradition, we have a beautiful party called Talatur, in Socaire, that is one of the most important parties we have for water in these moments. We wan’t to maintain our traditions, if the rivers dry nothing will be left here. The problem with SQM is that. All this goes to Europe and in Europe it’s green energy and all of that, but because of what? The water of ancient cultures. The call is to have an elevated vision and see this watershed as it is, a complete watershed. Imagine, they first divided us in Low and High Atacama, then River these and that, then by community. We have always been one watershed and one people, and that is the Likan-antay or Atacameño people. 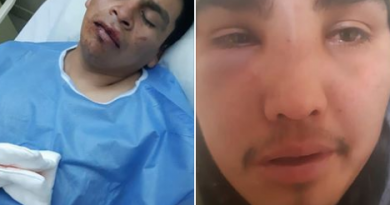